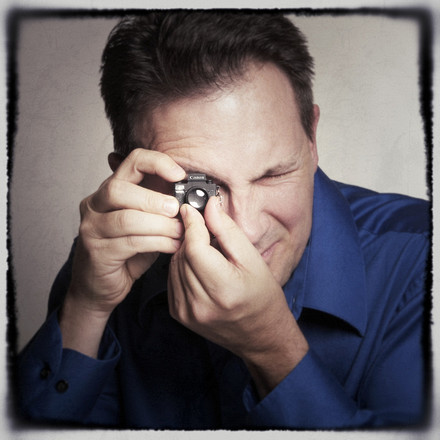 My photo education dates back to high school where I attended The Career Center, a vocational, technical and trade school in Winston-Salem, NC.  There I studied graphic design, printing, and photography in a class that had no computers, but it featured a darkroom that was as big as the classrooms in my traditional high school. In the afternoon I worked at our local One Hour Photo in Hanes Mall right next to Merry-Go-Round and Chess King where you could find all the latest 80's fashions including neon parachute pants and jelly bracelets!

After high school, I attended Chowan College in Murfreesboro, a small rural town on the east coast of North Carolina. Throughout my freshmen and sophomore years, my photographic work was focused mainly on the serenity of the rural farmlands and coastal landscapes of eastern North Carolina and the tidewater areas of southeastern Virginia. (Mainly because there wasn't anything else out there to shoot unless you were wearing camo and had a shotgun!)

After leaving Chowan College with my Associates Degree in Photography, I transferred to the University of North Carolina at Charlotte where I studied the various disciplines of fine art including drawing, painting, sculpture and design. It was through this process that I realized that about all I could paint was my dorm room walls with a roller, and about all I could draw was easy-to-read directions on how to get to the mall, but having a camera in my hand was like an extension of my own eye and I began using photographs in most of my art projects. This technique gave my work a unique mixed media appeal.

After graduating from UNCC I started working with a little known portrait photo studio called Glamour Shots. At the time, Glamour Shots was a small upstart retail business. The Eastland Mall studio was the eighth studio in the United States and after a half of a decade, that little small upstart company had over 350 studios worldwide. That rapid growth gave me the opportunity to learn a lot about growing a business from a small upstart into a multi-national retail giant. It also gave me the opportunity to learn that with a lot of teasing and a couple cans of hairspray you really could get a clients hair to be twice the size of their head.

Over a half decade, and more trips around the mall than most 16 year old girls can do with their dad's Visa card, I gave up the life of big hair and feather boas for a job selling new and used camera equipment at one of the southeast's leading camera stores, Charlotte Camera. About the same time of my employment, Al Gore invented the internet and our owners decided that it would be my job to see if you could actually put cameras on this thing called the web and get people buy them. Keep in mind at the time, only about five people had even heard of this other small upstart website called eBay. So who knew if this idea was even going to work..... Well we all know how that went.

So with my success in sales and a couple years of getting great deals on cameras and studio equipment, I found myself ready to tackle the world of photography on my own and open my first studio in the Plaza Midwood neighborhood near uptown Charlotte. With my previous two successes, I was fully prepared for the masses to come running in cash, checkbooks, and credit cards in hand. I was sure everyone would be ready to spend whatever it took to get the great shots by a master photographer such as myself. I remember those first couple days. Every so often I would pick up the phone just to make sure the dial tone was still there. Who knew it would take a couple months and hundreds of dollars in advertising just to get a handful of jobs.....

Thankfully, that has all changed. And now many years later my reputation and body of work does a large amount of that advertising and I have hundreds if not thousands of satisfied customers that have my name on the tip of their tongues when the word photography is mentioned. And thanks to them, I continue to be able to do what I love every day. So call me, last time I checked, the phone still worked, although these days, you may just get a busy signal.